We are strongest in the community

Back to the roots and values through "new work" teamwork. An Interview with co-founder Christian How is the Pura Vida Festival Retreat doing?

Honest truth is probably that what currently applies to Berlin also applies to our festival: Poor, but sexy. But overall very good, I would say.

Can you explain that? After the last festival you started a community funding campaign because you were down 5,000 euros.

Yes, the increased costs have not passed us by either. Luckily we have already been able to cover 3,500, mainly through ticket sales for next year and donations from our community. We are very grateful. In the future we want to try to acquire additional funds through foundations and brand partners. At the same time, interest in Pura Vida is greater than ever. It seems word has gotten around about what a wonderful kind of festival Pura Vida is.

We are already preparing the next festival, Pura Vida 2023. Quite a few things have changed.

Exactly - you're new, for example. Overall, there is a lot going on at the moment, especially behind the scenes. But there will also be very visible changes at the Festival Retreat 2023.

What were the biggest changes behind the scenes?

Our co-founder Felicitas is now studying psychology full-time and has finished her work in the Pura Vida project. It is a pity that she is no longer with us, but we are also happy for her that she has found her very own path and can take the next steps on it. We are incredibly grateful for the journey together and for all the strength and effort she put into the project to bring it to life with us.

Did you therefore start a call a few months ago and went looking for new team members?

Yes, exactly, but above all we wanted to expand the team overall. We have a small permanent core team that invests a lot of time in the project and then some volunteers who have supported us long before the actual festival. Then there are the volunteers who work with us to set up and dismantle the festival and ensure that everything runs smoothly during the festival. If you want, you can register now for 2023. In the past few months, we have primarily taken care of finding more volunteers who would like to work with us on a permanent basis.

And it's probably not that easy to find people who have a lot of time for such a project and don't have to earn any money at the same time? You - we - all work on a voluntary basis.

Exactly, that's definitely the disadvantage of starting a project like this without a large investment. In return, we can now act according to much more sustainable values ​​and develop at our own pace. The aim is, of course, that in the future the people who invest a lot of time in the project also get something out of it financially. Otherwise it is not viable in the long term. Nevertheless, the interest in our call was very high. You can tell that many people are looking for a task or mission that fulfills them in addition to their job. A task, in which they can find meaning and contribute. This also reflects the longing for a safer world, I think - especially in these turbulent times.

That means you didn't actually have to actively search - Pura Vida attracts the right people at the right time.

Interestingly enough, it really happened quite magically. We now have Kike on board, in the core team. We met two years ago in a community project in Costa Rica and when Kike came to Berlin, he was immediately hooked on the project. Kike is not only an incredible enrichment because he connects everyone around Pura Vida, he also takes care of numbers with passion, which we have lacked so far. At the same time, Michal joined the team, who contacted us for the role we've been looking for for a year and a half. And now we have a super awesome storytelling team with her as the lead. And in the background our good spirit Damien is swirling, who has been with us since April and takes care of sustainability, organization and purchasing.

What makes good and effective teamwork?

The basis of everything is that we have the same vision. And then the most important ingredient for everything else is what I like to call psychological security. By that I mean that everyone feels comfortable and seen and can express and contribute as he or she is. When people feel safe, they can thrive. For this, it is important to actively build and strengthen good interpersonal relationships - something that is often neglected in the classic work context. But if the relationship fits, you have a good structure and also follow a few communication rules, then you can achieve a pretty big impact together.

How does this look in action?

We start all our meetings, for example, with a short check-in, in which everyone briefly shares what emotions and thoughts he or she comes into the common circle with - to create understanding and equality, but also to clarify what is possible and can happen in the team today.

These are approaches and ideas that one of our new partners also stands for: The Dive, a New Work platform that will also give a workshop at the upcoming Festival Retreat...

Exactly, that's what we're aiming for. This is based on the concept of sociocracy: the idea that decisions are made together and that all those involved can and should contribute equally to the decision-making process. So it's not so much about titles or levels. There is a team lead, but no hierarchies. It's about working role-based. And everyone works independently instead of being delegated tasks from above.

So bottom up instead of top down?

Even better: co-creation. Each individual is part of the entire project and contributes and thinks along with it. At the end, not everyone has to be on board for a consensus decision. The question is: Is it safe enough to try? This enables a good balance between inclusive decision-making and speed.

We are guided by that. There are no final goals or defined destination for our work. The direction in which this ultimately unfolds is fundamentally open, as long as it unfolds within the framework of the common vision. Because everyone brings a new perspective and ideas that can change the course. It’s an organic, flexible process.

Why is this beneficial? You might end up with something completely different than what you originally intended.

Quite possible - and all the better! It's also about trusting yourself and the potential of the community, from which something new and good will emerge. We are strongest in the community and we can develop our creative energy best in order to develop meaningful and fair solutions for the benefit of all. This applies not only to teams in organizations, but in general.

Does that mean these approaches could also be useful on a larger scale - for better interaction in society?

Absolutely. Openness to new points of view and the trust that something meaningful and good for everyone can develop if the other’s perspective is integrated into the solution are key to a society that overcomes social and ecological problems together and develops further. Luckily, that's already happening in some parts of the democratic process, although it often sounds different in the public debate. Accessibility to such processes could certainly be simplified. There are exciting approaches as to how consent decision making could be used more widely in society. The negative counter-example is seen in countries where power is hierarchical and in the hands of a few. This creates brutal opposition, oppression and violence.

Maja Göpel, who will be a key note speaker at the Pura Vida Festival Retreat 2023, also wants a “reassessment of the values ​​that support people in their cooperative vitality.” Can this really work?

We are proven to be very social and empathetic mammals. Humans have always lived in communities, and the life of the individual has depended on our ability to cooperate. That principle is not true anymore in our capitalist system: Not only do you survive even being anti-social, but you can also buy the favor of others. But that doesn't change anything about our true nature as humans. A system that promotes taking away from each other in order to have more for yourself cannot work in the long term, as we can see from the social and ecological effects - and living in such a system does not feel good either.

That is also the idea behind Pura Vida Festival Retreat.

Yes. The idea behind Pura Vida is to go back to the roots of a good life and combine it with all modern achievements. It's about reconnecting with ourselves and finding fulfillment in it - instead of constantly searching for this externally, e.g. in the form of products or by being busy all the time. It's about making deep connections with other people that nourish each other. And it's about becoming aware that we are part of nature and not separate from it.

A retreat, however, does not sound like transforming society on a large scale at first.

First of all, our festival serves as an inspiration - to show that it can be different. Kind of a feasibility study. That what we came up with is really possible, in interpersonal interaction and in interaction with nature. And of course this system also needs powerful shelter spaces where you can draw strength.

And the second step?

We would like to consolidate our holistic educational offer, which means making various workshop offers possible throughout the year. Preferably also in one of our own inner-city retreat centers. In this way, these potential spaces can be integrated more closely into everyday life. And, in the more distant future, we might see some kind of community project on the horizon.

We'll talk about that in more detail another time. We didn't do that at the beginning of our conversation today, but would you like to share, as a kind of check out, how you're actually doing today?

Gladly - I'm doing very well - above all I'm very grateful for all the opportunities and inspiring people that I’m surrounded by. The end of the year is always pretty packed. But for me also with beautiful things: It's my family's birthday, it's my birthday this week. Overall, I'm exactly where I want to be in my life right now. It wasn't always like that and it was a long path. That's why I feel so grateful.

Happy Birthday Christian and thanks for this inspiring insight! 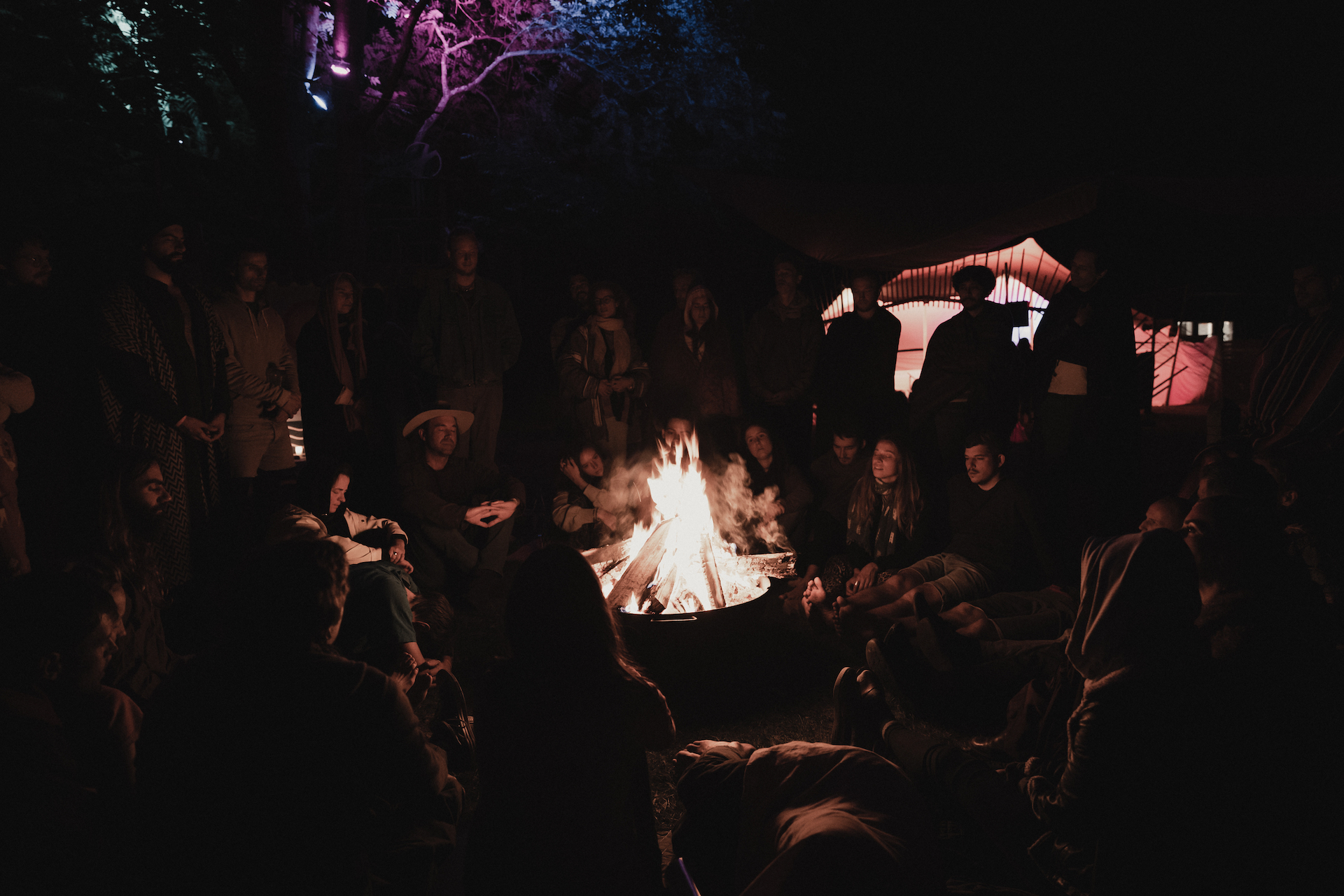 The time “between the years” is a mysterious one - quiet, still, but undeniably powerful. If we want to understand better what is happening with, in and around us during these gloomy winter nights, we should shine a light on forgotten rituals and stories that our ancestors have cultivated around this transitional time. Katharina guides as through an overview. 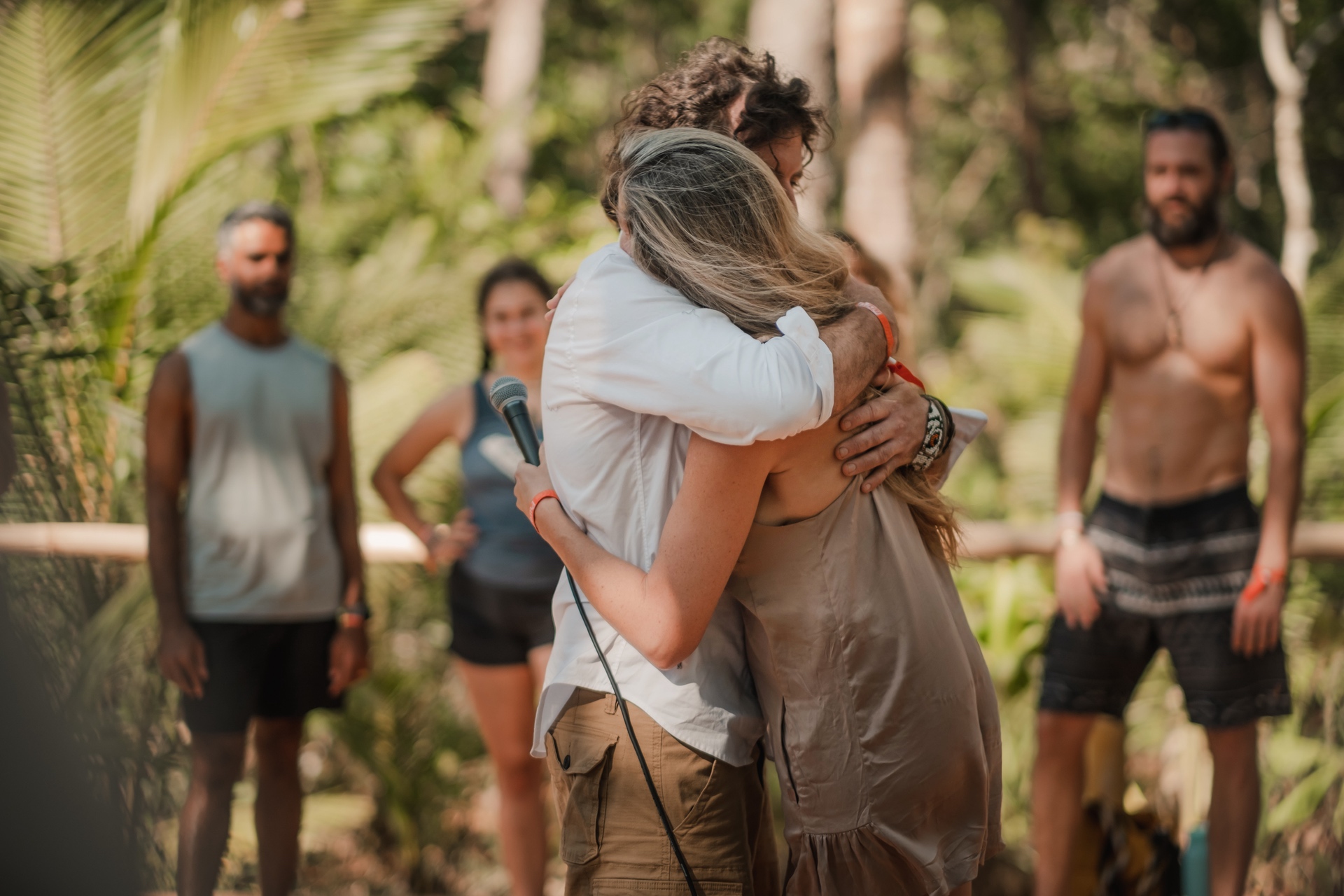 An art form and “social technology” that brings together social change with creative expression. 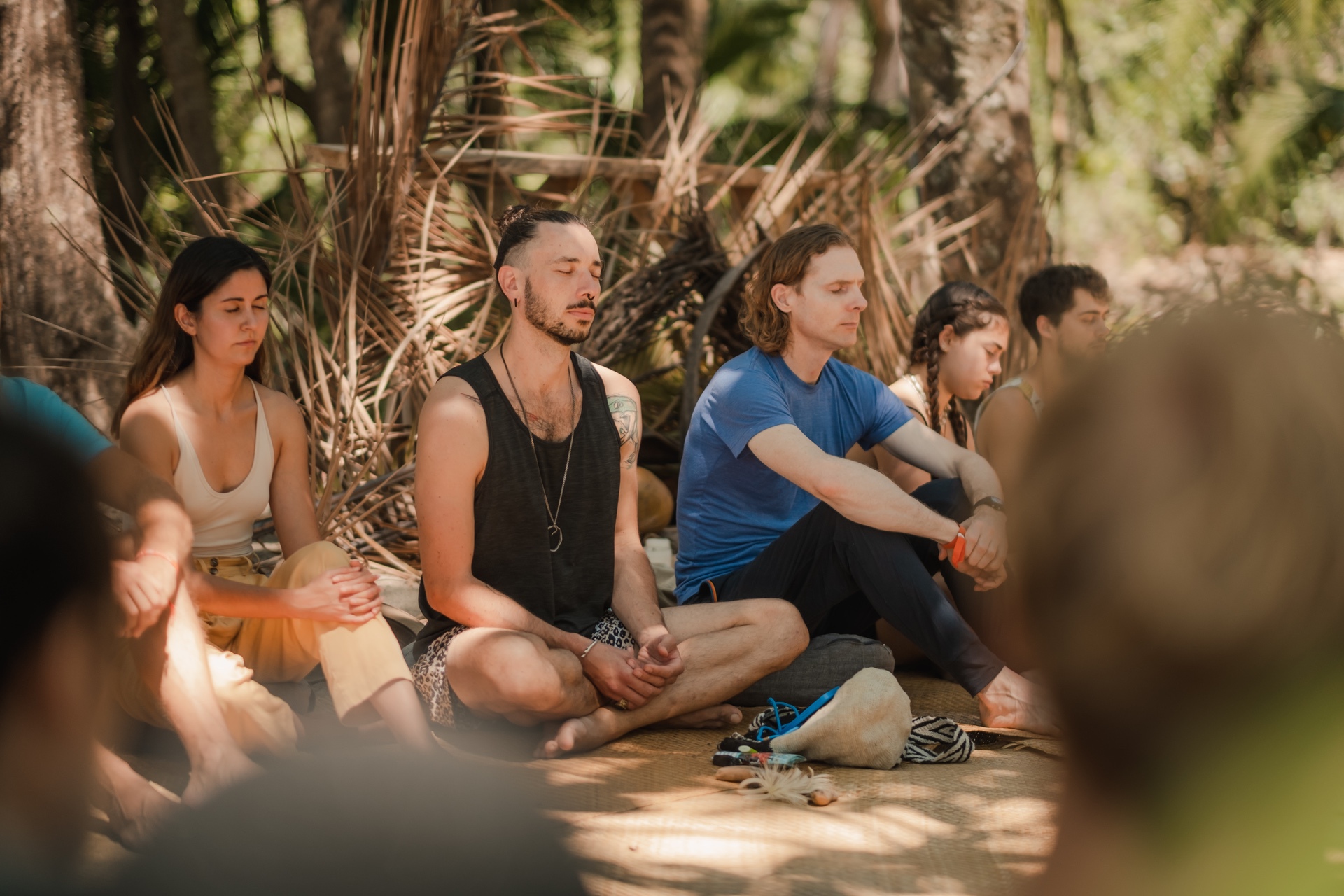 The science and art of exploring your mind. 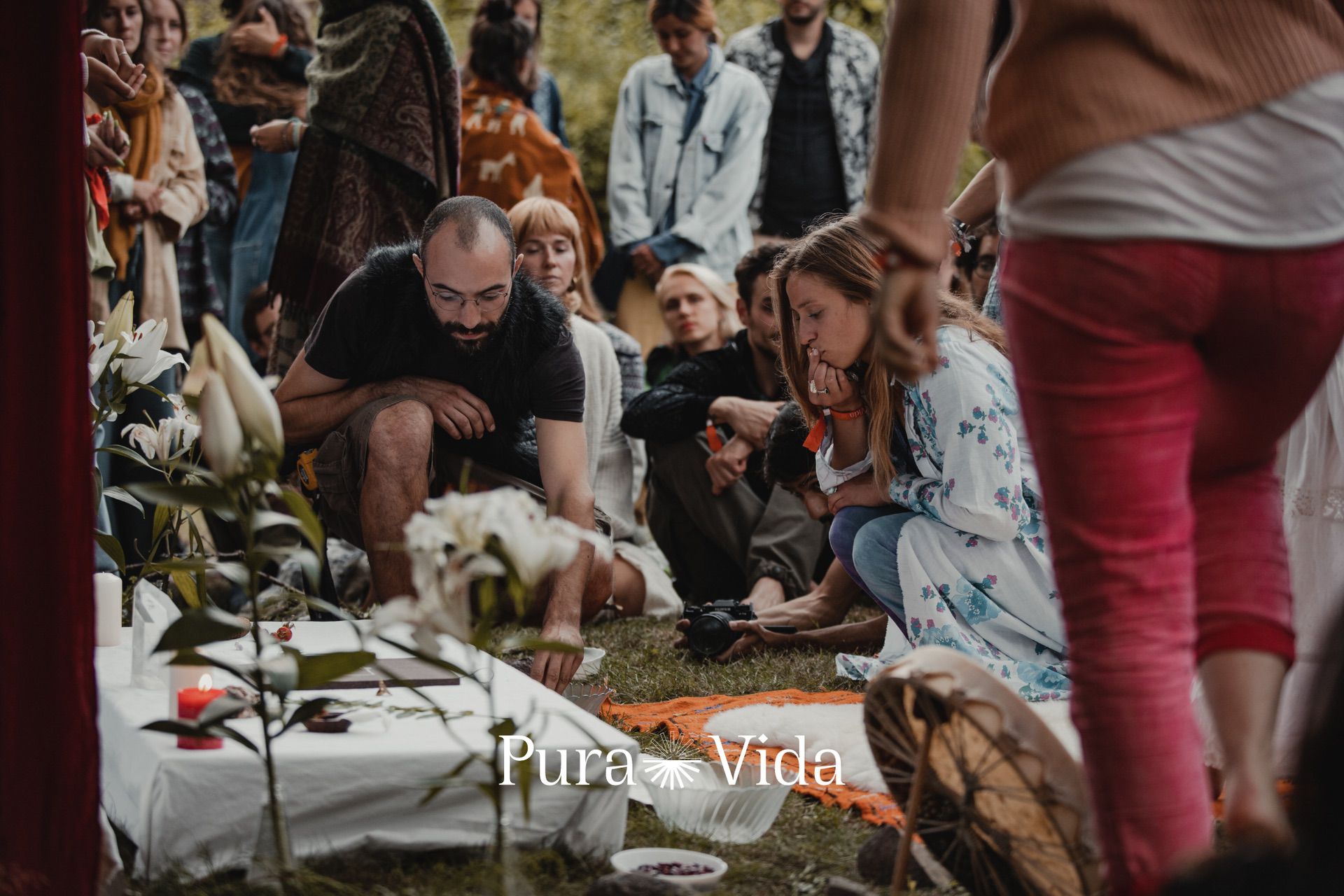 It is also the truest to our nature as social beings. Let me explain…

May 12, 2022
Start your journey now!
Become part of a flourishing community this summer and save your tickets for Pura Vida Festival Retreat.